One of the world’s oldest art forms inspiring future nanotechnology 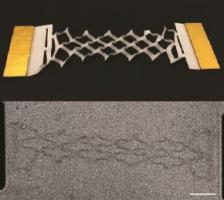 As described in a recent Nature paper and in a recent Quartz article, CCMR scientists are experimenting with kirigami, a version of origami where paper is cut, as well as folded, to make new and complicated shapes. In the above image, the upper image is large-scale kirigami made with paper while the bottom image is the nanoscale version made with graphene instead of paper. The scale bar in the lower image is 10 microns and both versions can be stretched to many times their original lengths while retaining properties of the unstretched state. Since graphene can conduct electricity, graphene kirigami has great implications for flexible, wearable, and implantable electronics.